HUMAN RIGHTS INSTITUTE OF THE BAR OF BORDEAUX

A short History of the Bar of Bordeaux *

Guillaume Le Blanc and the "commune of Guyenne "

The most original of all was certainly, Pierre Trichet, (1586-1644). It has a cabinet of curiosities and collects the instruments. Bibliophile, it is also in relation to poets and scientists. the first created in Bordeaux -and was a collector of mucic instruments . He wrote a Traité des instruments de musique, 1640, discovered only in the XXth century but yet considered as the best way to know intrumental music of the period.

Five Bordeaux lawyers for " the Judgement of History "

Restoration of the Orders.

Seals of the Republic

The Law-courts of Bordeaux inaugurated in 1846.


From the Rostrum to the Courtroom 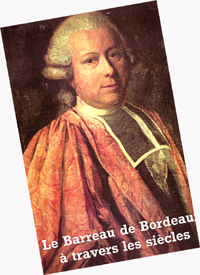 Abridged from "Le Barreau de Bordeaux ŕ travers les sičcles", ©2007 Bertrand Favreau and L.P.O. Editions All rights reserved.You may reproduce materials available at this site for your own personal use and for non-commercial distribution. All copies must include the above copyright notice.